Right side hitter Megan Beckett is a respected name in the PacWest even after taking a year off from the game. Despite once losing her passion for volleyball, her love is stronger than ever as she makes a second start with the Avalanche.

“What are you doing here? Aren’t we playing you tonight?”

Those were the words of an incredulous John Swanson when he ran into Megan Beckett working at a Sport Chek in Victoria last October.

In town to play the Camosun Chargers, the College of the Rockies coach knew Beckett as one of the top players in the PacWest, but hadn’t realized she had quit college volleyball.

“You should come and play for us,” he suggested.

Beckett laughed and said she wasn’t interested. She had burnt herself out of the sport and school, and was content to be moving on.

Now, just a year later, she’s joined the Avalanche and rediscovered her love for both volleyball and education.

It was a big leap, but it wasn’t the first time the now 21-year-old had reversed her decision after really, really not wanting to play.

“When I was 11, I was really into individual sports: I played tennis, I ran track and field [and] cross country, and I was a competitive swimmer,” she says, speaking from the COTR cafeteria, last week. “My mom had played a bit [of volleyball] when she was in university and she wanted me to play.”

When she tried to sign her up for a camp, Beckett refused.

Beckett explains that she was very shy as a child and that her mother was trying to push her to be more social by enrolling her in a team sport. After a few tears, she reluctantly went to the camp, loved it, and went on to be a part of it for nine years. 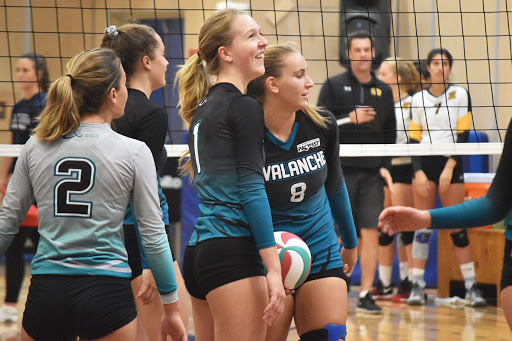 After that first hesitation, the next near-decade was all love for the sport. She played throughout middle school and high school, even though there wasn’t much of a program where she lived.

“I was the only one who really played volleyball [in high school], but my coach actually played for Team Canada. So, we had this really cool coach and she was really good,” Beckett says, “but I never played for a good high school team and I never really played on a great club team [either]. [Even so,] it was always my goal to play college volleyball.”

At Reynolds Secondary in Saanich, Beckett was team captain and MVP two years in a row. With her club team, Beckett helped lead them to a bronze medal at the 2012 National Championships in Toronto.

Finding a post-secondary institution that would take her, therefore, wasn’t much of a challenge.

“I had a teammate who had a recruiter … and he gave me some tips on what to do, like video and how to write a bio to send to coaches,” she says. “So, I sent them to a few coaches the end of my Grade 11 year and into my Grade 12 year.

“I had quite a few coaches contact me back, [including] a few down in the States, but I just wanted to stay home, so I ended up at Camosun.”

With the Chargers, Beckett was impressive in her first year and took centre stage after replacing an injured player.

“My first semester at Camosun, I didn’t get a whole lot of playing time, [but then] one of our right sides ended up hurting herself,” she explains. “I had never played right side… [but] I said, ‘Okay, sure,’ [because then I was going to] get to play.”

Not only did she quickly figure out how to play on the right, she excelled and finished the year as the conference’s rookie of the year.

“Honestly, I didn’t expect [that] at all,” Beckett says. “I thought Georgia [Hurry], from Douglas College, was going to get it. But, volleyball to me is not about the accolades and the awards. It’s nice to get them, but I would rather win a provincial title than be an MVP.”

That dream nearly came true in her rookie year as well, but Camosun ended up settling for a silver medal at the PacWest provincials. Being the top regular season team, however, they still got to compete at the CCAA National Championships in Montreal — an unforgettable experience.

Unfortunately, in her second year with Camosun, a lot of the magic disappeared and she became overwhelmed with mental and physical exhaustion.

During her year off, last season, Beckett got a full-time job, took online classes at Thompson Rivers University and kept her toe in volleyball by coaching and playing in a women’s league.

After taking, but not enjoying, Criminal Justice during her sophomore year, she decided to study Education at the University of Victoria in the fall of 2017. She had an even better proposition though.

Meeting John Swanson again at the PacWest provincials, she decided that she missed college-level volleyball, and then he made a serious offer for her to come to COTR.

“I told him I’d look into it and then I realized that [COTR] had the Education program here through UVic,” she said. “So, I signed up and here I am.”

After spending 21 years in the same house, Beckett is now living outside of Victoria for the first time and on Friday she will play her first game with the Avalanche against a familiar opponent.

Camosun is in town for the home opener.

“I was talking to my mom and my roommates about it [and] they wondered if it was going to be weird playing Camosun, [but] I don’t think [it will be],” Beckett says. “From my first year team, there is nobody left [and] from my second year team, there is one girl left.

There will be some familiar people, however, in the crowd. Beckett’s brother is flying in from Victoria, and one of her best friends and former teammates is driving down from Calgary.

“I’ll have some friendly faces,” she says, adding that she’s also hoping for a big crowd of locals. “I hope a lot of people come out… I think we’re going to be good. We have a lot of depth on the team.”

The Avs women play at 6 p.m. on Friday and 1:00 p.m. on Saturday to kick off their season against the Chargers.

While it’s a long way from where she expected to be a year ago, there is no doubt that Megan Beckett is exactly where she belongs, with the Avs.