The Clan went head-to-head with a giant and lost on Thursday night, as they fell in four sets to the Great Northwest Athletic Conference (GNAC) leader, the Northwest Nazarene Crusaders (NNU).

Despite strong performances at home by key players including Madeline Hait, Kelsey Robinson and Amanda Renkema, SFU was unable to contain the Crusaders, who continued their domination of the conference, pushing their winning streak to 12 games.

Down 24-21 at the end of a back-and-forth first set, SFU took a tactical timeout but unfortunately, not even the jazz band’s rendition of “Eye of the Tiger” could inspire them to claw their way back. NNU won the set after the next serve with a key block on a Clan attack by outside hitter Devon May.

SFU continued their strong play into the second set and managed to squeak out a 25-23 victory, finishing up with two straight kills from Kelsey Robinson.

“I think we showed a lot of composure at the beginning,” middle blocker Madeline Hait told The Peak. “It’s tough today because it’s a close game but I’m so proud of how my team played and everyone really came together.”

Hait, who was recently named the GNAC defensive player of the week, led the Clan offensively with 16 kills.

Unfortunately, the Clan could not maintain their solid play in the third set and decisively lost 25-13, notching only seven kills in the set. This killed the mood of a home crowd who had been treated to two sets of competitive volleyball, and a highly entertaining blindfolded volleyball contest during the intermission. 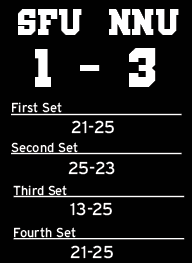 However, SFU returned to form, regaining the crowd’s support with a strong performance in the fourth set, featuring many rallies that could have gone to either side. In the end, though, they fell just short 25-21.

NNU’s Elayna Rice, who was named last week’s GNAC offensive player of the week, continued to shine by leading her team with 14 kills and, ultimately, got the best of the Clan.

“She was one of the key hitters and I definitely think that she’s a really good all-around player,” Hait said of Rice. “Something we can improve on is shutting down key hitters.”

The Clan will look to bounce back from this loss and already have their eyes set on Saturday’s tilt against Central Washington. Head coach Gina Schmidt likened the challenge to the one they just faced and said that she is “expecting another good game, just like this one.”